From bonded labour to land ownership

Based in the remote mountain areas of Nepal, the Haliya are among the world’s most vulnerable people. As Dalits – members of the heavily discriminated “untouchable” caste – they have been severely marginalised for generations. Haliya are communities of agricultural bonded labourers who have traditionally been forced to work another person’s land under the pretext of repaying an ever-increasing debt.

Ballabh*, was trapped in the Haliya system in Nepal and worked in his landlords’ fields day and night without any payment. 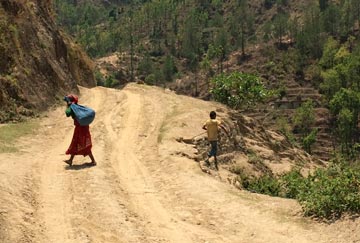 Slavery in Nepal: the Haliya system

In 2008 Ballabh was officially listed as a victim of the Haliya bondage system. He was given a special ID card that would allow him to access the government’s rehabilitation package, however, he was unable to access the support on offer as he did not know how to complete the application process.

It would take another 10 years before he received the support he was entitled to.

In 2018 Ballabh attended a workshop run by Anti-Slavery International partner, NNDSWO.  The workshops were intended to help Haliya people understand their rights and assist them to access the rehabilitation package available to them. Ballabh was helped to obtain the documents he needed to apply for the rehabilitation package and has since been granted ownership of a plot of land.

Anti-Slavery International estimated that by 2019 the rehabilitation program has reached less than 5% of Haliya families. Without support, families affected by bonded labour often fall back into slavery as they lack other options to support and protect themselves.