Paul Henty on running the London Marathon for Anti-Slavery

“I have been involved with Anti-Slavery since 2015 and the 2018 London Marathon was the fourth marathon I have run for them. Although the toughest yet – it was the hottest on record -it was an absolute privilege”, writes Paul Henty.

“Anyone who has ever looked at the textbook marathon preparation schedule knows how unrealistically demanding it is – apparently four months before the race you should be pounding the pavement most nights.  To add to the challenge, my wife and I discovered we were expecting our first child. He hasn’t arrived yet but has already started taking over our lives.

My first training began in January at a hilly Half Marathon in Cheshire, where snow fell and the wind blew. Unfortunately, it left me with a heavy cold, so I was unable to train for another few weeks.

Come the Springtime and training conditions did get slightly better. The fundraising was also picking up pace. My family, friends and colleagues – who are used to me championing the Anti-Slavery cause – responded well to my appeal for sponsorship.  My firm – Charles Russell Speechlys – also contributed a generous donation.

“The cause itself also helped me to get out there and run. As a lawyer I have been advising on the Modern Slavery Act (MSA) since its introduction. It is that work which has brought me into contact with the fantastic work that Anti-Slavery does, led by some very impressive and hard-working individuals.

I have been truly shocked by the scale of the problem of modern slavery. It is incredible that slavery is more prevalent than ever – with one person on average being enslaved every 15 minutes.

There are reasons for optimism that the battle against slavery is being won.  The MSA – while not perfect – has been a big step forward in terms of providing an adequate legal framework for detecting and preventing slavery and helping victims.

The mandatory reporting rules have led big corporates to take the issue seriously – and to be more careful about the suppliers they work with. Tougher rules are being discussed which could help further.

A lot of the credit for this progress belongs to Anti-Slavery International, which has been a tireless advocate and lobbied relentlessly for improvements. 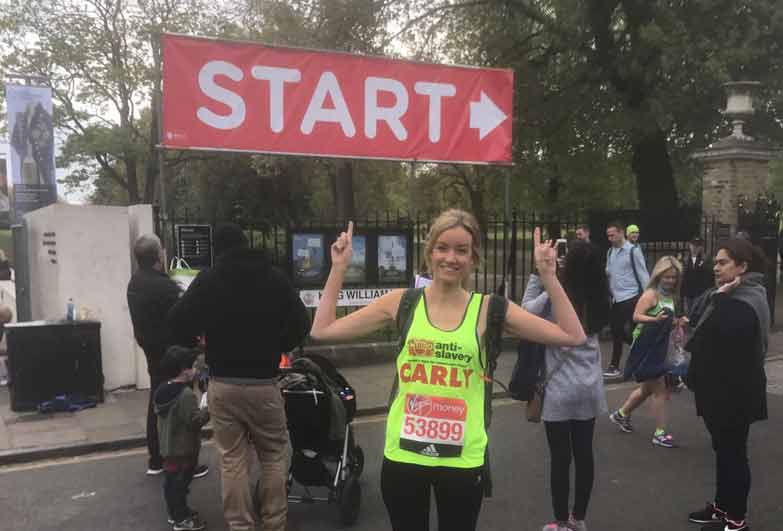 Take on your own challenge and support Anti-Slavery

“I was brimming with excitement, Londoners had come out in force to cheer us on, making for a real festival atmosphere. But shortly past Rotherhithe the pain began and before I reached even the halfway point at Tower Bridge, I began to realise how the heat was taking its toll. The crowd were a massive help though.

Through sheer stubbornness I pushed myself onwards as I gritted my teeth through the final few miles. At one point I passed a runner dressed as Jesus – complete with wooden cross and loincloth.  “If I’ve overtaken Christ”, I thought, “I can’t be doing badly!”

As I crossed the finish line in The Mall, there was an immense feeling of relief to have made it. I’m not sure where Jesus finished…

It was a tough one. I may have suffered a bit but nothing like the thousands of victims who are helped every year by Anti-Slavery.

The London Marathon is a fantastic event and a platform for very many worthy causes to highlight their work and raise funds. For me, it was even more special to have represented Anti-Slavery – a small charity punching above their weight in a fight against an immense global problem.”