So why did I apply to ride the London 100-mile bike race when I wasn’t a cyclist?!

Last year, my daughter raced, and I went to cheer and the atmosphere was just amazing. Thousands of cyclists were having fun and wearing vests supporting a multitude of charities. It was then that I decided I was going to do it the following year.

As I had retired and we had bought a second home in France, where I thought I could train, what was there to stop me? Quite a lot as it turned out!

There were so many causes I wanted to support through my bike ride as there had been a lot of deaths in my family and I had a career in mental health. But when I came across Anti-Slavery International, I knew it was for me.

Sick people are usually cared for and loved, unlike people trapped in modern slavery. I had watched the film ‘Taken’ and it made me feel sick – humans treated as commodities. Anti-Slavery International can offer some hope. 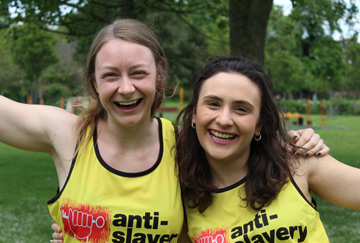 Fundraise for freedom your way

So, full of enthusiasm and naivety I got my place on the Ride London bike ride for 2020. I contacted the staff at Anti-Slavery International, who gave me some fundraising tips, an Anti-Slavery vest and some lovely encouragement.

My husband, a keen cyclist was thrilled. We dusted off my old bike and I started to accompany him on very short rides, which gradually got longer. We also planned a cycling holiday with friends in February to kick off my serious London 100 training.

Of course, our holiday was cancelled. Whilst this was massively disappointing, I thought I would be able to train on quiet roads in France but cycling in the country was banned. We instead tried to buy a training bike, which was unsuccessful. My 2 months training for Ride London 100 in lockdown, was weeding our garden!

We suspected the race would be cancelled, as it finally was. As some friends had already sponsored me, when restrictions in France were lifted, I decided to design my own cycle route along the French coast to reflect the distance and ascents of the London race.

And then I tripped on an uneven step in the garden; broke my wrist and banged my head. My wrist was put into plaster for at least six weeks. Another hurdle to me completing my challenge.

After a week of feeling sorry for myself and lounging around, my husband managed to find a ‘turbo trainer’, something I could ride on whilst having my wrist in plaster! The turbo trainer links to a phone app, meaning I was able to design a route that reflected the original London route, with near enough distance and climbs

So, on midsummer day plus 1, with my sling neatly tied, I climbed onto my bike at the bright and early time of 6.15am. After 10 hours, 7 of them cycling, I had done 100 miles. Mission accomplished! Finally, after everything that was stopping me!

My very generous sponsors were all happy with my solution and I’m grateful to them for supporting this hugely worthy cause.