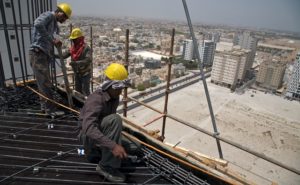 The exploitation and abuse of thousands of South Asian construction workers in Qatar has been under the spotlight in the last few years, particularly in the context of the controversial 2022 FIFA World Cup.

Anti-Slavery have played a key role in highlighting the issue: after working with the Guardian on the idea of the investigation we recommended that long-term Anti-Slavery member Pete Pattisson explore the issue. His investigation uncovered the high death toll of migrant workers, as well as evidence of forced labour and abuse of human rights.

A number of reports have since highlighted the dangerous and exploitative working conditions that some migrant workers face. Here’s a short list:

Thousands of Indians and Nepalese (transiting through India) migrate to Qatar every year, many without knowing what the risks are of what they’re getting themselves into. Whilst there are organisations that work to provide assistance to migrant workers in India, often work has focused on workers migrating from South India. In recent years however, the highest number of international migrant workers have come from the North Indian state of Uttar Pradesh.

To ensure that information and awareness is reaching those migrating from North India, Anti-Slavery is starting a new project in Delhi and Uttar Pradesh, partnering with Centre for Education and Communication (CEC) and with the support of the UNISON International Development Fund.

The project will provide safe migration training and easy-to-read materials to hundreds of workers and their families, ensuring that workers are aware of the situation that they may encounter in Qatar, so that they can make an informed choice about whether to migrate. If they do decide to migrate, workers and families know their rights, entitlements and how to seek assistance.

To ensure sustainability, in addition to training potential migrants and providing information material, the project will also train local civil society organisations and trade unions, so that they can provide similar training, information and assistance in the future.

We hope that the project will contribute to ensuring that migrant workers – who are naturally seeking a better life and better wages for their families – are protected against exploitation, human rights abuses, forced labour and human trafficking.