Jakub Sobik on what are the real numbers of people recognised and protected by UK authorities as victims of slavery. 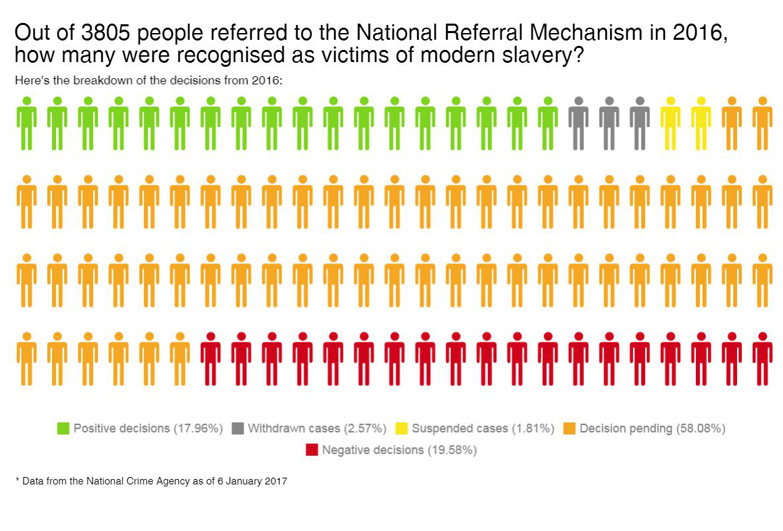 The National Crime Agency published the data from the National Referral Mechanism (NRM) from 2016. NRM is a mechanism to which people who are suspected to have been trafficked (‘potential victims of slavery’) are referred and signposted on to relevant support services, and their cases scrutinised to decide whether they indeed were victims of slavery.

Some numbers in short:

Predictably many media outlets published articles talking about the numbers of people reported to be in slavery in the UK ‘doubling’ and ‘surging’, and reporting ‘dramatic rise’ prompting calls for ‘heightened public awareness’ to tackle this ‘rising threat’.

What is the problem with this?

The articles might well be correct that the numbers of people referred as potential victims of slavery are on the rise. However, this might not be due to an increasing number of people being trafficked and exploited in the UK, but rather could be attributed to a rising awareness of these crimes, perhaps due to the debate about the Modern Slavery Act.

The problem is the misleading narrative about the ‘rising threat’. To explain this we need to take a closer look at the numbers.

There were almost 4,000 potential victims of trafficking referred to UK officials in 2016, but how many of them were actually recognised as victims? We produced a little infographic above to illustrate it.

Only around 17% of people (635 exactly) were lucky enough to be granted a positive NRM decision by the end of the year, recognising officially that they were indeed a victim of slavery.

Huge number of 2053 people who were referred to the NRM throughout 2016 were still waiting for a decision on their case as of 6 January 2017. Over 55% people who may have gone through a trauma of being trafficked were still waiting for the UK officials to make a decision about their status, even though the law specifies they should get it within 45 days. It leaves the person in limbo and uncertain about their future.

Then there are 962 people who were not deemed to be a victim of trafficking – over half more than those who were. A negative decision means that a cut off to the support they may have been receiving whilst awaiting their decision.

We know from our past research that a lot of negative decisions are connected to the immigration status of the victims rather than to their real experiences of slavery.

Already in 2013 in our Hidden in Plain Sight report we discovered that EU nationals are around four times more likely to be recognised as victims than non-EU ones. And the latest available NRM numbers (from 2015) confirm it, for example around 82% of British and 77% Polish nationals were recognised as victims by the end of the year, but only 11% Vietnamese and 10% Nigerians.

As it happens, both Nigeria and Vietnam have been recognised as priority areas for the government as the main source countries. So the discrepancy between government priorities and the actual practice of identifying and protecting victims is jarring.

Before we make sweeping statements about the numbers we have to apply a better scrutiny to the numbers and look at what is really happening to slavery victims. And we have to demand from the government that it properly protects all slavery victims without looking at their passports first.