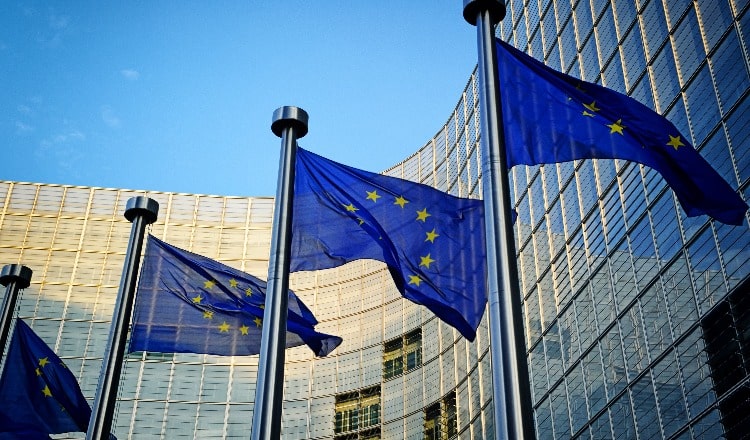 Since 2017, our work in the European Union has focused on calling for the EU to introduce stronger laws and policy that will ensure corporations take meaningful steps to prevent forced labour and that victims of forced labour can access justice.

As the world’s largest single market, the EU has huge potential to take effective action to prevent forced labour in global supply chains. Over 16 million people are estimated to be in forced labour in the private sector, which includes people producing the materials in goods or products exported to the EU, as well as products produced in the EU. This includes, for example, wine from France, seafood from Thailand, minerals for technology from the Democratic Republic of Congo, and cotton from Turkmenistan and the Uyghur Region, China.

We focus on calling for the EU to introduce stronger laws and policy that will ensure corporations respect human rights and the environment.

Our advocacy focuses on calling for the EU to:

Key reports and research include:

Anti-Slavery International and European Center for Constitutional and Human Rights response to the European Commission call for evidence on the proposed EU forced labour instrument to “keep the EU market free from products made, extracted or harvested with forced labour, whether they are made in the EU or elsewhere in the world.”

In this submission, we build on our previous work on how laws should be designed which ban the import of goods produced with forced labour. This contribution builds on our experience in working with partners based in countries with a high prevalence of forced labour which are linked to supply chains of products sold in the EU. Furthermore, this contribution builds on the lessons learnt from existing import control measures in the USA, and analysis of current gaps in EU legislation.

Following the long-awaited publication of the European Commission’s proposal for mandatory human rights and environmental due diligence legislation in February 2022, we released a comprehensive analysis of the proposal for a directive on due diligence.

Despite some of these positive elements, current loopholes are limiting the upcoming law’s potential impact on the lives of workers and communities around the world. We give specific recommendations for the European Parliament and the European Council to strengthen the directive and achieve real change on the ground.

Following the G7 Summit in Carbis Bay, we, together with the European Centre for Constitutional and Human Rights, published a position paper on when and how governments should introduce import controls to end forced labour.

Import controls should not be the only measure used to address forced labour in global supply chains. Instead, they should be introduced as part of strong legal, trade and development framework to address the root causes of forced labour – poverty, lack of legal protection, worker representation and discrimination.

On 28 June 2021, we published new research, undertaken by the Rights Lab, University of Nottingham, to understand how the upcoming EU business and human rights law could affect workers’ human rights through two case studies: the leather industry in India, and the coffee industry in Brazil.

What if? Case studies of human rights abuses and environmental harm linked to EU companies, and how EU due diligence laws could help protect people and the planet.

ECCJ and Anti-Slavery International’s report details a number of case studies where EU-based companies have failed to address corporate abuse and environmental harm in their global value chains, profited from it, and so far managed to avoid liability before the courts.

The case studies clearly demonstrate how EU wide mandatory cross-sectoral human rights and environmental due diligence legislation, with improved access to remedy rules, would make a difference in these cases.

In February 2022, the European Commission published its proposal for mandatory human rights and environmental due diligence. It also published its commitment to introduce a law banning forced labour goods. These announcements were a game-changer, and came as a result of our sustained campaigning.

We are now working with our partners in the EU and around the world to ensure these commitments turn into legislation that drives respect for people and the planet. For the latest news on our EU campaigns, check out our blogs.