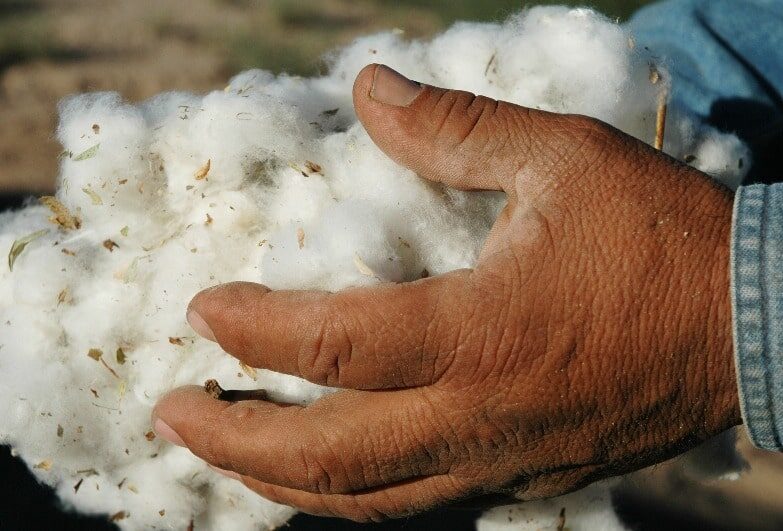 What is state-imposed forced labour?

State-imposed forced labour takes place when national or local authorities force citizens to work, where people have not offered themselves voluntarily.

In 2017, the ILO and Global Slavery Index estimated that 4 million people are in state-imposed forced labour, and that 20 countries were forcing their population or sub-populations to work under threat of menace or penalty.

State authorities might force their citizens to work as a method of mobilising labour for economic development, or can also be a systematic practice to punish political dissidents or discriminate against religious or ethnic minorities. It can also include the exploitation of conscripts and forms of prison labour.

Often state-imposed forced labour can link to our global supply chains – for example, governments forcing their citizens to pick cotton, which is used to make clothes and textiles sold around the world.

We now continue to work with the Cotton Campaign to end state-imposed forced labour in the cotton industry in Turkmenistan, as well as to continue to call for wider reform to uphold labour and human rights in Uzbekistan.

In July 2020, Anti-Slavery International co-founded the Coalition to End Forced Labour in the Uyghur Region, a coalition of Uyghur rights, human rights and labour organisations, trade unions and investors.

Our work in Turkmenistan

Every year, the Turkmen government sends thousands of people from both the public and private sectors into the cotton fields, including key workers such as teachers, doctors and nurses. These people are forced to leave their daily jobs to harvest cotton, or to pay money to hire pickers to replace them.

The state imposes quotas on cotton picking, and those who fail to meet their quotas face harassment from the authorities, and risk losing their jobs. The work is strenuous and requires great physical effort. Working and living conditions in the fields are terrible, and the work often exposes cotton pickers to serious health risks. Sometimes children are forced to go cotton-picking in their family units or to replace their parents.

The government of Turkmenistan firmly restricts all fundamental rights and freedoms, including the freedom of association, expression and religion. Activists and independent journalists critical of the government face intimidation, harassment, physical attacks and imprisonment. This means that many of the most prominent human rights defenders must work from exile.

Anti-Slavery International’s partners Turkmen.news and the Turkmen Initiative for Human Rights, some of the only independent civil society organisations covering Turkmenistan, work through local networks to undertake their key work to expose Turkmenistan’s forced labour in the cotton sector, among other pieces of work on human rights in the country. This on-the-ground monitoring is extremely difficult, and puts monitors at great personal risk, meaning that organisations must work with utmost care to never disclose their networks.

In spite of global and persisting efforts by civil society organisations and international bodies, the Turkmen authorities continue to deny the use of forced labour in the cotton harvest.

Our work against Uyghur forced labour

The government of China is perpetrating mass human rights abuses against Uyghur and other Turkic and Muslim majority-peoples in the Xinjiang Uyghur Autonomous Region lin Western China, known to its local people as East Turkistan. These abuses include forced labour, mass surveillance, arbitrary detention, rape, torture, political ‘re-education’ and forced sterilisations. The Chinese government is targeting these native people of the Uyghur Region based on their ethnicity and religion. Human rights and legal experts and some governments have determined these abuses crimes against humanity and genocide.

An estimated 1 million to 1.8 million Uyghurs and other Turkic and Muslim people are held in mass arbitrary detention. Uyghurs are forced to work in the Uyghur Region and across China in factories that produce goods sold all over the world.

Many global industries are at risk of profiteering from Uyghur forced labour, due to the Uyghur Region and China’s position as global manufacturing hubs. The global fashion industry and global solar industries are particularly high risk. Around 20% of the world’s cotton and 45% of the world’s solar-grade polysilicon (the main material used in solar panels) supply comes from the Uyghur Region. Other sectors at risk include, agriculture, particularly tomatoes, electronics and industries using paper pulp.

Given the severity of the issue, in 2020, Anti-Slavery International co-founded the Coalition to End Forced Labour in the Uyghur Region. We call on leading companies and financial institutions to ensure that they are not supporting or benefiting from Uyghur forced labour. The Coalition also calls on national governments and international bodies to use all possible legislative and policy measures to put pressure on the Chinese government to end its persecution of Uyghurs.

We work with the Cotton Campaign on Turkmenistan and the Coalition to End Forced Labour in the Uyghur Region to call for an end to these practices.

In March 2022, together with the Cotton Campaign, we celebrated the historic achievement of the elimination of state-imposed forced labour in the 2021 Uzbek Cotton harvest.

For more than a decade, the international community, including the Cotton Campaign, brands and international bodies such as the ILO, have been monitoring the situation and putting pressure on the Uzbek government to end their state imposed forced labour practices. When the Cotton Campaign launched in 2007, the Uzbek Government was forcing over 1 million children and adults, including medical staff, public sector employees and students, to pick cotton every year during the harvest.

At Anti-Slavery International, we raised awareness of the abuses and our supporters campaigned to encourage brands to sign We also advocated at governmental, UN and ILO levels to put pressure on the Uzbek government to end its forced labour system. None of this work would have been possible without the brave work of Uzbek civil society, human rights activists, and labour monitors, who worked at the risk of harsh retaliation by the Uzbek Government.

Now with the elimination of state-imposed forced labour, the Cotton Campaign’s call to boycott Uzbek cotton has ended. International companies now have the opportunity to support responsible sourcing of cotton and textiles from Uzbekistan.

Together with peer organisations, we are now: