Anti-Slavery International joins 300 organisations from around the world, requesting that companies ensure that they are not linked to the horrific abuses of workers in the Xinjiang Uygur Autonomous Region of China, known locally as East Turkistan.

Uyghur rights and human rights organisations are calling on companies that produce textiles such as homewares and garments, to ensure that products linked to the forced labour of the Uyghur and other Turkic and Muslim-majority peoples does not enter their supply chains.

This is because the Chinese government is targeting these native people of the Xinjiang Uyghur Autonomous Region on the basis of their ethnicity and religion. This persecution includes mass detention – as many as 1.8 million Uyghurs, Kazakhs, Kyrgyz and Hui have been detained in internment camps and prisons constituting the largest mass detention of an ethno-religious community since World War II, forced sterilisation of women, forced labour, forced separation of families, high-tech surveillance; and torture.

The atrocities are at such scale that human rights experts have defined the abuses as crimes against humanity.

Systematic forced labour, affecting factories and farms across the region and China, makes up a key part of the Chinese government’s system of control. There is a risk of forced labour in virtually any workplace in the Uyghur Region. Research has shown that Uyghurs and other Turkic and Muslim-majority peoples are also being forcibly transferred to work in factories in other regions of China. 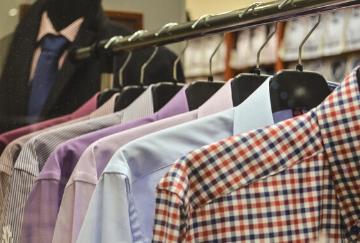 Tell your favourite brands to commit

As the global community has looked upon the unfolding situation in horror, an open secret in the fashion and home furnishings industries has been the likelihood that their products could be tainted by this forced labour. T-shirts, pyjamas, cushions and curtains in our homes could all be linked to the persecution.

This risk exists at all levels of companies’ supply chains, from cotton farm to factory floor. The Uyghur Region produces over 80% of all China’s cotton and means that, staggeringly, roughly one-fifth of all cotton products globally could be made with cotton and/or yarn from the region. There is a near certainty that many of these will be tainted with forced labour. Further, a number of key Chinese companies, which rank among some of the largest suppliers to global fashion brands, are propping up the Chinese government’s efforts to expand forced labour of Uyghurs and other Turkic and Muslim-majority people.

None of this is breaking news. Investigations over the past two years have repeatedly exposed these links. Numerous high street and luxury brands around the world have been linked to the forced labour system.

Despite this, the global apparel and textile industry has failed to take effective action. We are slowly seeing belated recognition of the issue, and some companies have taken piecemeal steps. However, a reliance on traditional industry approaches remains. These approaches will not work amidst the Chinese government’s strategy to oppress the Uyghur and other Turkic and Muslim-majority peoples. It is impossible for any global company to exert influence to be able to prevent forced labour in the Uyghur region, or provide remedy to the victims. Chinese suppliers supporting the system will listen to the government, not global brands.

This is why Anti-Slavery International has joined the Coalition to End Forced Labour in the Uyghur Region. The Coalition is calling on apparel and textile brands to urgently exit the Uyghur region at every level of their supply chains, to prevent the use of forced labour of Uyghurs and other groups in other facilities, and to end relationships with suppliers supporting the forced labour system. This is the only way the global brands can ensure they are not profiting from the system.

There is no time for empty statements and inadequate action. Companies which want to be on the right side of history must take action today.