Mohan Lal and his wife Bhagavati come from a village in Rajasthan in northern India. They are Dalits, a caste that commonly suffers discrimination and poverty.

In 1992 they travelled to work at a brick kiln further north in the state of Punjab, with dreams of a better life.

Originally, they had planned to work only for one season. However, they were forced to stay at the same brick kiln for over 25 years after becoming trapped in debt bondage. They initially took out a loan to move, which was then controlled by the brick kiln owner, and increased exponentially.

Most of their wages went towards the repayment of their loan. They were never able to repay it in full, and instead had to take other loans, falling into a never-ending cycle of debt.

Their youngest child was always held captive as ‘insurance’ whenever Mohan Lal and his family wanted to visit their home in Rajasthan to ensure they returned to the kiln.

Mohan and Bhagavati managed to send their children to a nearby state school, which is quite unusual for brick kiln workers. Finally when Hardeep, their youngest son, was stopped from attending his graduation exams, he contacted Anti-Slavery’s partners Volunteers for Social Justice (VSJ) for help and VSJ helped the family to safety. 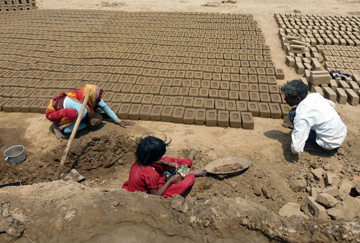 Documentary on slavery in brick kilns

Despite district authorities being obliged to provide immediate relief and necessary support for their survival, the family was left with nothing.

It took for the VSJ to organise a sit-in protest of around 600 brick kiln workers outside of the local magistrate’s building for almost two weeks for the family to be provided with financial support. However, they were denied the official bondage release certificate, which would entitle them to compensation and allow them to build a slavery-free future. Mohan’s and Bhagavati’s struggle continues.

Their case is a classic debt bondage case that represents the agony of many millions of brick kiln workers in India in the 21st century. An estimated 2.3 million workers employed in brick kilns every year work and live in precarious conditions and aren’t able to leave.

Anti-Slavery International supports workers in the northern ‘source’ states of Chhattisgarh and Uttar Pradesh – the states where many workers usually migrate from to work in brick kilns – and in the Punjab, where many of the kilns are located.

Working with the authorities has always been challenging because of a widespread denial of the existence of bonded labour practices across India. However, invoking national mechanisms, such as the National Human Rights Commission, is helping to mount pressure on local authorities to implement the law and secure the rights of workers.

What is the most encouraging is that our work to empower vulnerable workers by providing education, assistance and legal support is starting to bear fruit. The fact that 600 local brick kiln workers came together and joined the protest for Mohan Lal’s family shows that our work is increasingly paying off, and that these discriminated communities are becoming more confident, that together they can stand up for their own rights and demand justice from the state.