To mark World Day Against Child Labour, Jakub Sobik takes a closer look at child slavery, and highlights what Anti-Slavery is doing to tackle it.

Like Ananya* from India, who had to wake up at midnight and work through the night to prepare bricks for moulding.

“I like reading, but my father didn’t have any money [to send me to school], so had to take me to the brick kiln to work instead. We used to get up at midnight or 1am and work through the night making clay ready for moulding.”

Ananya migrated with her family from Uttar Pradhesh, India, to work in a brick kiln in the northern state of Punjab. Together with our partners we have recently advocated for Punjab state to introduce a policy providing education for children living with their families in brick kilns, and now we are pressing for its implementation.

Like Oumar* in Senegal, who had to spend hours begging every day just to earn enough to eat and avoid being harshly punished by his master.

Like Irene* in Tanzania, who was beaten by her employer every time she wanted to take a short break from her domestic chores. There are 10 million children who, instead of going to school and spending their days playing with their friends, get exploited for someone else’s gain. They suffer abuse, fear and isolation. 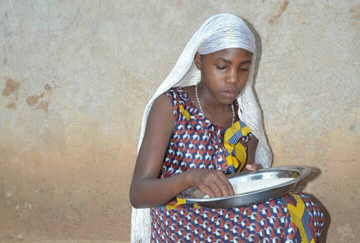 “I started working as a domestic worker when I was fourteen. I washed clothes, mopped the house, bathed children and cooked food for a whole family. The most difficult thing for me was I did not get an hour to rest. When I tried to rest, my employer beat me up.

But now I can call for help from the [Anti-Slavery and partners] project workers and stand up and stop my employer from behaving like that.”

Irene attended classes organised by Anti-Slavery’s project and built her skills and confidence. In the future she is planning to become pharmacist.

The vicious cycle of child slavery

Children are particularly vulnerable to exploitation because it’s much easier to deceive a child.

Sadly, the vicious cycle of slavery rarely ends with survivors escaping their captors, because children rarely receive a formal education whilst in captivity and have trouble finding employment later in life.

Additionally, the trauma of abuse often affects every aspect of a child’s life, including their health and the ability to build normal relationships with other people.

Many survivors are likely to stay in poverty, in low skilled and low paid jobs. In turn, they will have little chance of providing their own children with an education and a good start to their lives.

Building freedom for the long run

Anti-Slavery works with children in many countries across the world, and every project operates in a completely different cultural context. However, one common theme applies: we work to secure a long-term future of freedom for children and families affected by slavery.

We support children to become less vulnerable by enabling them to defend their rights and providing them with access to education to help increase their chances of finding decent
employment.

For example, in Niger we created six schools for families born into slavery and controlled by their masters. This was the first time that children from these families had access to any formal education. A decade on, the families are completely free from their masters’ influence. Their children perform way above the national average on school exams, and the first children have started attending secondary education.

The communities which have formed around the schools have also helped to advocate with the government to build three additional schools in other areas.

We’re also making sure that we don’t leave the most vulnerable communities behind. For example, we have recently started a project on tackling forced child begging in Niger and Mali – an issue that no international organisation has addressed so far .

We change children’s futures. The transformations we witness every day give us hope that we can raise a new generation who will ensure that slavery is no longer acceptable, and no longer possible.
We won’t stop until every single child around the world is free from slavery.

*Names have been changed