The rhetoric and proposals that emerged from the Home Office on 24 March were, the Government claimed, all about making immigration and asylum systems ‘fairer’. But the Government’s New Plan for immigration’ policy statement, published on the same day, muddles modern slavery identification and support with immigration policy, and threatens to discriminate against and criminalise vulnerable people – labelling them as either ‘good’ or ‘bad’ due to factors outside of their control. The UK can and must do better. And here, I’d like to explain what we’re doing to try to make sure survivors of modern slavery are afforded a real route to recovery.

We at Anti-Slavery International work towards freedom for everyone, everywhere, always. We know that freedom can only ever be achieved when people have choices – options which are accessible in practice – and are treated with dignity. We know too that exploitation, including trafficking, is complex and takes many forms. We are opposed to any measures which reduce options, and instead have long advocated for much-needed changes to the modern slavery identification support systems which centre on survivors’ needs. What survivors really need is security and certainty so that they can move on from exploitation and rebuild their lives.

We need facts, not fear-mongering

We agree that our trafficking identification and support systems need improving, but we do not recognise the abuse of the system as described by the Home Office, which has motivated parts of the New Plan for Immigration. Our experience from listening to survivors, and the evidence we have seen, instead points to serious trauma inflicted on survivors by the very slavery identification system that should help them. This trauma can include lengthy delays, endless questioning and uncertainty, and a long state of limbo, all prolonging survivors’ struggles and preventing them from rebuilding their lives.

We should expect the UK to be a beacon for freedom from modern slavery, but six years on from the Modern Slavery Act there is still no guarantee of any leave to remain in the UK even for people positively identified as trafficked. The Government claims that the Act is being abused by criminals, which both undermines survivors’ confidence in the system and is not supported by the facts: 92% of first-stage and 89% of second-stage trafficking decisions are positive, suggesting there is no evidence at all that people are being referred into the system without good reason. Dangerous rhetoric of the system being ‘abused’ is only likely to further deter people from being identified and accessing support and justice.

There’s a huge problem, too, with the misstated scale of the problem of modern slavery in the UK, which underestimates the number of people who need support. In July 2020 the Centre for Social Justice calculated that the true number of people in modern slavery in the UK might be in excess of 100,000. But in 2020 there were only 3,084 people positively identified as a survivor of slavery in a final (second stage) decision. We need to move beyond overheated claims about abuse of the system to focus on the real issue, which is that we are only identifying a tiny proportion of exploited people. 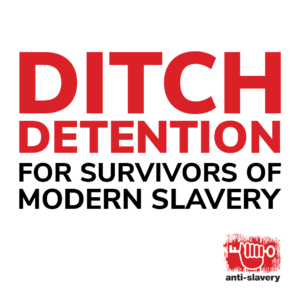 The UK’s modern slavery and asylum systems are separate but often intersect as people seeking safety are exploited, or exploited people access the asylum system to stay safe. We welcome commitments, outlined in the New Plan for Immigration, to give security to people who arrive in the UK via a resettlement scheme. But it’s only a first step – and it does not justify undermining the options for people whose circumstances mean they fall outside of these schemes. Other proposals to make it harder for people identified as trafficked to leave immigration detention risk deterring people from coming forward to be identified – a clear win for traffickers.

This week Anti-Slavery International launched a campaign calling on the Government to Ditch Detention for survivors of slavery. Under new changes survivors officially recognised as potential trafficking victims would not automatically be released from detention, leaving them in an environment known to put them at risk of serious mental and physical harm. The Government hopes to rush these changes through Parliament without a whisper of debate – we need your help to persuade MPs to protest this change, which would undermine the UK’s claim to be a safe haven from modern slavery. 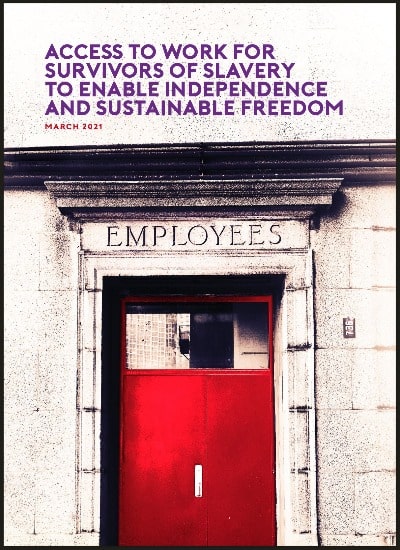 Survivors are clear that these issues weigh heavily on their minds and morale. Survivors who have direct experience of exploitation and the corresponding support systems are best placed to highlight problems with the current systems, and to identify improvements – but sadly, their perspectives and interests are lacking in the New Plan for Immigration. Many survivors find their time in the identification system to be an extension of their abuse: an ordeal which compounds, rather than enables them to move on from their experience of exploitation. Six years after the Modern Slavery Act, with an identification system which is over a decade old, it is clear improvements are needed. However, these need to centre on the needs of survivors, on supporting people to come forward, to disclose, to know they will be believed and are safe.

This is why, together with allies ATLEU, the Anti-Trafficking Monitoring Group, Co-op, Focus on Labour Exploitation, Kalayaan, Sophie Hayes Foundation and Survivor Alliance we are calling for people to have access to work as part of their recovery process. Programmes such as the Coop’s Bright Future have shown how positive entering work after exploitation can be, enabling people to begin to put their exploitation behind them and build a new future.

The Home Office’s proposal’s need an urgent re-think. If fairness is a priority this must mean access to justice and options for all, no matter the circumstances of how someone arrived in the UK. Any reform of the UK’s asylum and modern slavery support systems must start with the needs and interests of the people they exist to serve – providing them with the certainty, safety and security we all rely on.