Children as young as ten years old are being forced to take part in dangerous camel races in the United Arab Emirates (UAE), new photos released today by Anti-Slavery International can reveal. The photos show children racing at the Sweihan camel race track and even show a child narrowly avoiding being trampled by a camel.

A total of 12 races using under 18 year olds took place on a single day and were part of the ‘Sheikh Sultan bin Zayed al Nahyan Camel Race Festival’ at the Sweihan race track in Abu Dhabi on 9 February 2010. 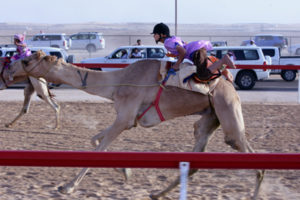 It is illegal for anyone under the age of 18 to take part in camel racing in the UAE and the recruitment or use of children in camel racing is punishable by three years in prison or a minimum fine of 50,000 dirhams ($13,614/£8,928) or both. Despite the ban the race was watched by the police.

Racing camels can weigh up to 450kg and reach speeds of up to 50 km/h. Riders regularly suffer injuries and even death from falls or being trampled by camels. Also the smashing of genitals while racing camels is a common injury for child jockeys. Ambulance staff present at the races on the day confirmed that several children had been hurt though no information was supplied on the severity of their injuries.

In 2005, the UAE Government banned the use of under-18s in camel racing following pressure from Anti-Slavery International and the international community on the continuing trafficking of children as young as four years old from Pakistan, Bangladesh, Sudan and Mauritania to be used as camel jockeys. Since implementing the ban, children have been officially replaced as jockeys by robots.

Anti-Slavery International has evidence that children are being used as camel jockeys only at this one race in the UAE, though children interviewed on the day explained that they were involved in up to three races a year.

As well as the ban in 2005, the UAE undertook a repatriation process with UNICEF and created a compensation scheme for former child camel jockeys.

UAE officials explained that children were used in heritage races because they were over 10 years old, were with their parents and were Emirati and therefore were not trafficked. Also, that the use of ‘soft’ sand and the reducing of the distance of the race from 12 km to only 3 km had made the race safer.

Despite official proclamations that the children were Emirati, doubts over their origin exist as many were south Asian in appearance and spoke south Asian languages. Some additionally said that they had been racing since before the ban came into existence.

Also, any children trafficked to the UAE before the 2005 ban, aged only three of four years old, would have spent their entire childhoods far away from their original homes so it would only be natural that they now describe themselves as Emirati.

Catherine Turner, Anti-Slavery International’s Child Labour Programme Co-ordinator, said: “Soft sand will not prevent a ten-year-old child racing at up to 50 kilometres an hour from seriously hurting themselves or worse if they fall. Children are often very frightened and forced under duress to take part, some are so scared they attempt to jump off mid race.

“Using children as camel jockeys breaks international laws to protect under 18s from dangerous work no matter what country they are from. We are concerned that the fact the race was attended by the police and UAE dignitaries means that child protection is not being taken seriously.

“The UAE’s police need to be trained to be aware that it is their duty to prevent all children under the age of 18 from taking part in these races. The police also need to be vigilant to ensure that no children are involved in dangerous or forced labour on camel farms, which has been a problem in the UAE previously.” 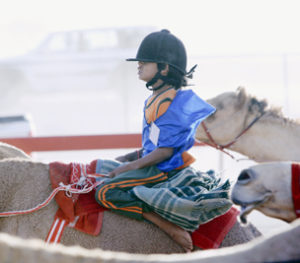