We join the international outrage at the ongoing invasion of Ukraine and stand in support of the Ukrainian people. Our concerns about the safety and wellbeing of those fleeing this violence, many of whom who will likely find themselves increasingly vulnerable to trafficking and exploitation, are deep and multi-faceted. The OHCHR and the UN Special Rapporteur on trafficking in persons, The Council of Europe’s Group of Experts on Action against Trafficking in Human Beings (GRETA) the UK’s Independent Anti-Slavery Commissioner have all raised their concerns about the increased risk of human trafficking due to the invasion, which reiterate the OSCE recommendations for anti-trafficking measures in light of the conflict.

Conflict exacerbates vulnerability to trafficking and many of those fleeing Ukraine are ever more vulnerable to exploitation. But there is an additional risk to those who’ve survived trafficking and exploitation in Ukraine prior to the conflict. They may still be extremely vulnerable and now find themselves at risk of re-trafficking. In Anti-Slavery International’s Precarious Journeys report, Ukraine was identified as a key country on the trafficking routes from Vietnam to Europe, and we are concerned that there may be many people in Ukraine who will have even greater challenges in seeking safety.

We stand firm in our call for safe migration routes. We are pleased that neighbouring countries are opening their borders to those fleeing and we urge them to pay close attention to the most vulnerable. We join the calls on the UK Government to make the journey to the UK much easier and we renew our position that the Nationality and Borders Bill will make it ever harder for people to enter the UK and access the support they sorely need.

“While we are pleased to see the British public prepared to open up their homes to refugees fleeing Ukraine, we are greatly concerned about the ‘very light touch’ checks the government says will be needed for most such households. This represents a shirking of Government duty to care for vulnerable people. As we have warned with the Nationality and Borders Bill, when the Government doesn’t create safe and legal routes for people to migrate with dignity, they are leaving the door wide open for trafficking and exploitation of vulnerable people. “(Neil Sammonds, UK & Europe Advocacy Manager)

What we can all do: spotting the signs of modern slavery

As those fleeing Ukraine disperse around Europe, we must all be on the look out for the signs of modern slavery. 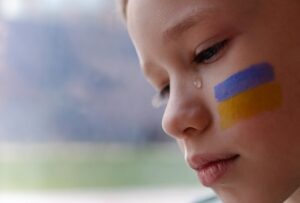 TAKE THE SIGNS OF SLAVERY TEST

Take this short test and see how aware you might be of the signs of slavery. There are only 5 questions.

If you, or you believe someone else, is currently experiencing human trafficking then please contact the following organisations:

There are also a number of key resources available including:

Ukraine: what businesses should do

Businesses can have a crucial role in preventing exploitation of people in their supply chains. They need to be taking a pre-emptive response, with heightened due diligence measures in countries hosting a large number of refugees to prevent forced labour from occurring. This includes identifying and monitoring working and recruitment practices in supply chains, with increased engagement with suppliers to mitigate the risk to workers. This engagement needs to also be taking place in sub-contracting factories, to detect exploitative recruitment and prevent undeclared subcontracting.

Certain previous industry practice within other humanitarian crises – such as Syrian refugees in Turkey – should be used as a basis to inform best practice, including securing stable work for refugees, which has long remained precarious in Turkey for Syrian refugees. Companies should implement a refugee protection strategy, in collaboration with trade unions, civil society, and refugee-support organisations to go beyond inadequate audit models, combat and remedy abuse, and provide holistic support to refugees. This should include providing clear signposting to services that can assist refugees.

Crucially, companies should support the employment of refugees in their supply chain. This should include clear policy communication to suppliers, and what steps suppliers should take in different scenarios regarding permission to work. Notable previous leading practice by NEXT, which included a policy not to expel any Syrian workers from their factories, can be referred to. It is crucial to encourage suppliers to be fully transparent in disclosing if they identify undocumented workers, in order to provide support, without fear of repercussions.

Anti-discrimination procedures must also be in place. We welcome the fact that the EU Temporary Protection Directive is providing Ukrainians access to work, housing, education and medical care. However, we are concerned that these benefits do not extend to all those fleeing the conflict in Ukraine, leaving people of other nationalities exposed to exploitation with fewer safeguards. This needs to be considered in risk assessment processes, with an emphasis on opposition to discrimination.

Contracts and any information that workers are provided with around their rights need to be in a language that they understand. This should include communicating a clear mechanism in which workers can raise grievances, with access to remedy for any exploitation or discrimination faced for refugees. For example, the app launched in Turkey by ASOS, in partnership with IndustriALL Global Union, provides workers with information about their rights in both Turkish and Arabic, with access to remedy. This could be emulated here amid this new conflict. Specific remediation plans to address abuses, including discrimination, must be in place. This must also include child labour remediation plans, which cover safeguarding, reimbursing income lost and support with education.

We will continue to monitor the situation closely as events unfold. If you have any questions or queries, or additional information, please get in touch via email at supporter@antislavery.org.

We will endeavour to update our resources list as swiftly as possible.