Dr Chris O’Connell highlights the increasing link between climate change and modern slavery, including the work of a recent conference on this critical issue.

Contemporary slavery, environmental destruction and climate change are intrinsically connected and mutually reinforcing. This was the key message that emerged from an international conference entitled: “Towards a Holistic Approach to Contemporary Slavery and Climate Change”, which took place online on October 11, 2021.

The event was organised by researchers from Dublin City University and the University of Hull, with the support of the Wilberforce Institute for the study of Slavery and Emancipation, and Anti-Slavery International.

A report summarising the main contributions is now available, accompanied by videos of the different panels and keynote talks.

Events during 2021 have established clearly that the climate crisis is real and that it presents increasing danger. From the ‘heat dome’ in the Pacific North-West, to catastrophic floods in Europe, China and South Sudan, to drought in South America, to wildfires in the Mediterranean, this year has smashed records for extreme weather right around the globe.

In fact, the conference was held in the wake of the latest and most damning report of the Intergovernmental Panel on Climate Change (IPCC), and in the run-up to the COP26 summit in Glasgow. Featuring a broad range of academics and practitioners from around the world, the conference illustrated that the connections between slavery, climate and the environment have historic roots that continue to this day.

We learned four key lessons from the conference contributions::

1. There is clear evidence that climate change acts as a “stress multiplier”, with both sudden disasters and slow-onset events driving unsafe migration and deepening existing vulnerabilities to exploitation and slavery.

For example, in Ghana rising temperatures are contributing to declines in fish stocks and crop production. This is causing food and water shortages for small farming and fishing communities, pushing many into debt bondage or compelling families to sell children into forced marriage.

2. The presentations emphasise that the climate crisis is not the only environmental issue worsening vulnerability. From India’s brick kilns, to gold mining in Peru, to deforestation in Brazil, numerous examples were provided of the close relationship between forced labour and environmentally degrading activities.

The presentations went further, however, revealing that these activities negatively affect the lives, livelihoods and eco-systems of local communities. Pollution in the form of heavy metals, mining waste and agri-chemicals poison the air, soil and water, damage human health and reduce biodiversity, while emissions and land use changes accelerate climate change. Unmitigated, these activities can lead to a vicious circle of contemporary slavery, environmental destruction and climate change.

3. This situation is underpinned by unequal power relations that treat the rights, livelihoods and eco-systems of some people as disposable. In other words, the issue of who is and is not made vulnerable, and which areas may be sacrificed, are determined by powerholders at local, national and international levels.

Participants drew particular attention to the role of States and their frequent failure to uphold legal obligations under human rights law, including those of climate migrants and internally displaced populations; as well as international commitments to protect the environment, remediate damage and reduce emissions.

States not only may be inclined to disregard their obligations in favour of economically important activities, but often introduce policies that actively contribute to worsening vulnerability and environmental devastation. These policies are facilitated by the ‘othering’ of racialised groups and nature itself.

Keynote speaker Wilma Mendoza, for example, highlighted rising levels of social discrimination and violence toward indigenous peoples in Bolivia that she linked to the expansion of extractive projects like mining and mega-dams onto Indigenous territories.

4. Finally, and most crucially, the conference contributions began to map a holistic pathway toward a just and sustainable world. Among the overarching concepts highlighted were the importance of systems thinking and rights-based approaches to climate change, and the need for a just transition that respects the rights of all.

More specific ideas discussed were the importance of climate smart agriculture to strengthen resilience to climate change and improve food security, and the urgent need for a significant increase in climate finance for adaptation and remediation.

Perhaps most striking were the examples of resistance and the creation of alternatives by those most at risk from the nexus of climate change, environmental destruction and contemporary slavery. Examples included the empowerment of migrant domestic workers in Sri Lanka, and the ongoing conservation of precious eco-systems by indigenous peoples around the globe – as evidenced by a recent UN report, which found that almost half of all remaining intact forests in the Amazon basis are in Indigenous territories.

These struggles illustrate the need to contest, disrupt and overturn the relations of power upon which this nexus was and is built.

We will continue to work on this increasingly urgent issue to protect both people and planet. 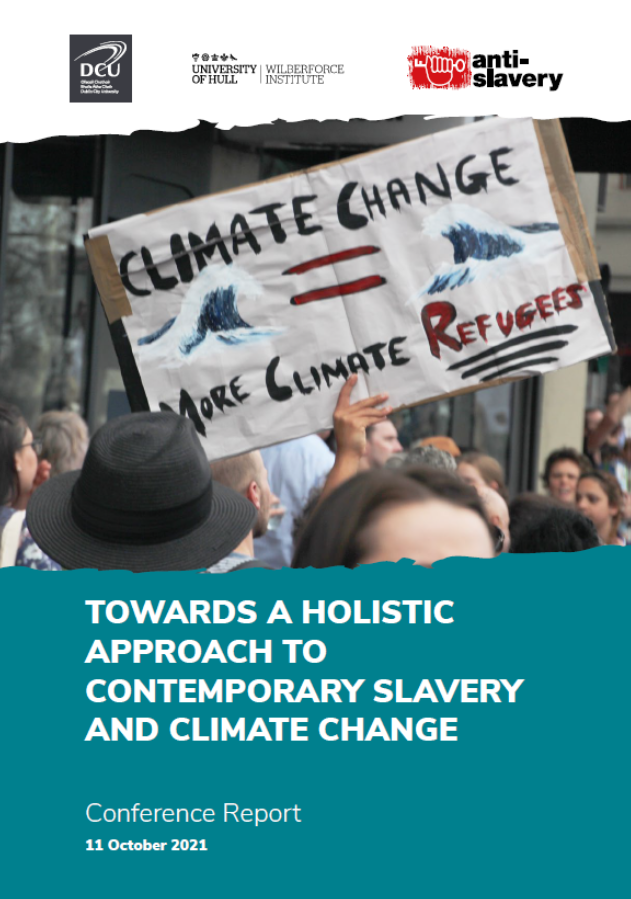