Adéla Mackie, fellow at Anti-Slavery International, explores the link between climate-induced migration and modern slavery as we launch our new report with IIED on this critical issue.

Climate change is having a catastrophic effect on the planet – and, in turn, people. As crops, water sources and farming continue to suffer, livelihoods are being destroyed and communities left devastated.

As a result of conflicts over increasingly scarce resources, people are being forced to migrate to meet their basic needs. However, an issue which often goes undiscussed is how climate-induced migration is making people vulnerable to being trafficked and trapped in a life of slavery.

That’s why today we’ve launched our new report, Climate-Induced Migration And Modern Slavery: A Toolkit For Policy-Makers, in partnership with the Institute for Environment and Development (IIED), exposing the link between climate-induced migration and modern slavery.

The report shows that:

Crucially, this research identifies climate change as a risk multiplier that makes people who are already vulnerable due to conflict or inequality more likely to become victims of modern slavery.

In northern Ghana, communities experience severe drought, leading to low crop yields and food shortages. Young men often move south, pursuing work as farm labourers or as miners. However, such  work can end up as bonded labour – when a person is forced to work to pay off a debt that never ends.

To cope with climate-induced devastation, some families in desperation sell their children to labour agents and into forced marriage, leaving young women more vulnerable. And, when migrating south to escape these practices, women and girls as young as 14 are becoming subjected to forced labour and debt bondage.

These women can be engaged as Kayayie (carrying goods on their heads as labourers). They do not receive the total amount of payment for their work, supposedly to pay off a debt to an adult female, posing as their guardian. Because this exploitative labour practice includes debt bondage, this debt will never be paid off. What little they receive is spent on accommodation, leaving nothing for their other basic needs.

“Working as a kayayei has not been easy for me… all my earnings go to [the woman providing our accommodation] and only sometimes will she give me a small part of the money I’ve earned.” (Salamatu, 22)

Sadly, Ghana is just one example of the continued exploitation of women and girls which is being aggravated by the climate crisis.

In 2020, Cyclone Amphan swept across the Bay of Bengal, leading to widespread displacement and loss of livelihoods. In Bangladesh alone, more than two million people were evacuated from their homes.

After the cyclone, three quarters of households reported that at least one family member had migrated from home. This was often to urban slums, where they face poverty, homelessness and become vulnerable to exploitative practices – including modern slavery.

Our new report shows that policy-makers need a coherent response to the risk of climate-induced migration and modern slavery in climate-affected populations.

The human rights of people across the globe are inextricably linked to a stable climate. That’s why, we must act now to protect the world’s most vulnerable people: those entrapped in modern slavery. 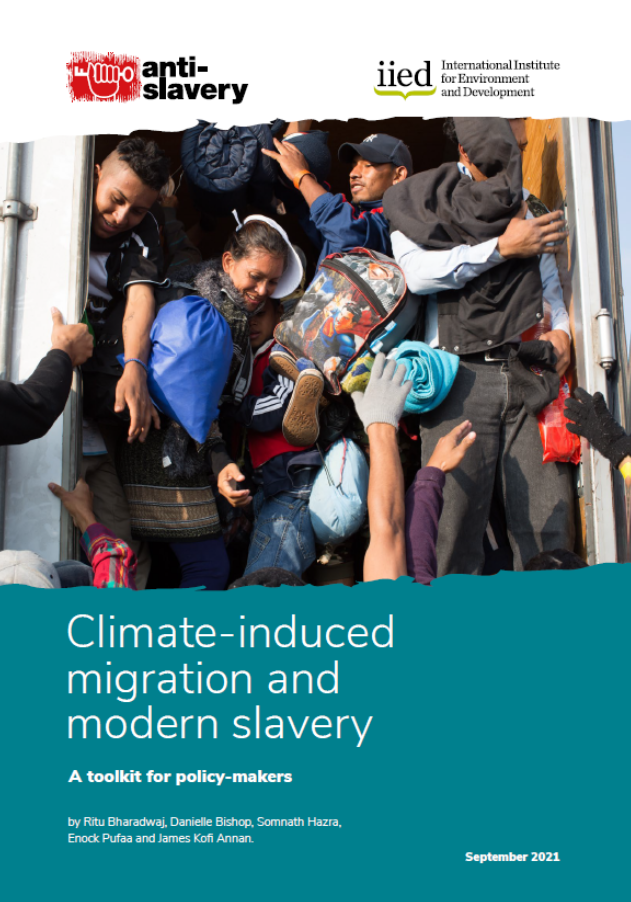