Why the petition to restore the pre 2012 overseas domestic worker visa is so important to preventing abuse and exploitation – a blog by Avril Sharp, Legal Policy and Campaigns Officer at Kalayaan.

While my employer works on the pandemic frontlines as an NHS Hero I, a domestic worker, hold down the fort looking after their kids and making sure everything’s okay when they come back to recharge before going back into the fray to treat their patients. We are in this together! – Tina* (name changed) is a Domestic Worker living in the UK.

But if their employer is controlling, then the worker doesn’t have the chance to make friends or build relationships that they can turn to when they are in trouble. In 2018 two thirds of migrant domestic workers experienced physical, verbal or sexual abuse. Over half are not given enough food or a private place to sleep. The COVID pandemic will only have made things worse.

In 2012, the Government – despite committing to address modern day slavery – restricted the visa to six months and tied it to the original employer, increasing the risk of abuse to an already vulnerable group of workers. 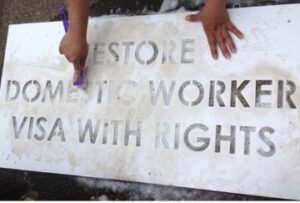 Sign the petition to reinstate and protect migrant domestic workers’ rights. The petition needs 10,000 signatures – Please help to get it there.

Why do people come to the UK as migrant domestic workers?

Migrant domestic workers are those who accompany their employer from abroad. Some work for good employers who offer decent work and a workplace free from violence and harassment. Other workers are badly mistreated and exploited.

The original Overseas Domestic Worker visa, introduced in 1998, allowed domestic workers to change to another employer, and renew their visa. The visa allowed them to enforce their rights at work, including taking their complaints to the police and courts, so acted as an important deterrent to abuse. The visa also allowed them to be joined by their spouses and children, and ultimately apply to settle in the UK.

In 2012 changes were made to the visa, tying it to the employer the worker entered the UK with, and restricting it to a maximum of six months. This meant that domestic workers were reliant on their employers for their visas, making them highly vulnerable to exploitation. This situation has been made worse by the Coronavirus pandemic.

In 2016, following demands by migrant domestic workers and their allies including Anti-Slavery International, the government conceded that workers need to be able to change employer to leave abuse, but this is merely an illusory right; the visa remains non-renewable, meaning that workers have only months or weeks in which to find new employment. This problem is exacerbated when controlling employers confiscate their workers’ identity documents: this means that if workers leave and try to find new employment, they have no way to prove they have permission to be in the UK or the right to work. These workers are at real risk of being abused and exploited as they need to accept any work they can find in order to survive. This undermines the rationale for being able to change employer in the first place: to find safe and decent re-employment.

The callous restrictions of the visa scheme for domestic workers reflects the devaluation of their work; the idea that it is ‘low skilled’ has not been borne out by the scale of the contribution made by migrants in key worker roles during the pandemic. As the UK settles into the new Brexit agreement there’s a risk of similar visa schemes being extended to other sectors such as agriculture; a sector which is already riddled with reports of exploitation.

Kalayaan*, The Voice of Domestic Workers* and others in the Anti-Slavery sector are calling on the UK Government to reinstate the pre-2012 Overseas Domestic Worker visa to help tackle the scourge of modern slavery and protect vulnerable workers on UK shores.

* Kalayaan and The Voice of Domestic Workers are both charities working to improve employment laws for migrant domestic workers in the UK.

Around 23,000 Overseas Domestic Worker visas are issued each year to domestic workers entering the UK from outside of the EU, accompanying an employer to work in their private household.

Evidence collected by the Voice of Domestic Workers shows that migrant domestic workers are highly likely to suffer from labour exploitation and abuse: