When Anti-Slavery International helped organise a visit to Mauritania for high profile US civil rights leaders to learn about slavery in the country, I expected some resistance from the Mauritanian government. I did not expect that the delegation would be refused entry to the country and detained in the airport for eight hours.

The leaders were literally barred at the border by a government which claims they have ‘nothing to hide’. Surely a government that is claiming to be making progress in tackling slavery would at least officially welcome a group of well-wishers seeking to show solidarity with slavery victims and anti-slavery activists?

The US delegation was led by the Abolition Institute, a Chicago-based group working to promote awareness of Mauritanian slavery in the US, and has found support particularly among African-American leaders, for whom slavery and its legacies remain a defining issue, and Muslim leaders, who strongly oppose the interpretations of Islam being used to legitimise slavery in Mauritania. The delegation included –Professor Jonathan Jackson, son of Reverend Jesse Jackson Sr. and National Spokesperson for the famed Rainbow PUSH civil rights organisation, an Islamic scholar, two Muslim judges, and Che ‘Rhymefest’ Smith, a Grammy and Oscar winning recording artist.

When I had visited the US and spoke to activists there, I was struck by the similarities between the slavery system in Mauritania and in pre-civil war America – the brutality, the inheritance of entire families in slavery, the dislocation and rupture of family relationships. The difficulties of people leaving slavery in the two countries also bore resemblances, with landlessness typically forcing former slaves into other exploitative arrangements; enduring racism, discrimination and violence against them, and the State finding ways to deny them basic civil rights like voting and education.

The very mention of slavery resonated deeply with African-Americans involved in the civil rights movement, and their emotions were palpable when my Mauritanian colleagues spoke about being born into slavery.

Among the Muslim leaders I met, many of whom were also African-American, I could see frustration when my Mauritanian colleagues quoted the passages in the Qur’an that are typically used to defend the brutal slavery system. They were ready to respond with verses and interpretations demonstrating that Islam favours emancipation and absolute equality.

How Mauritanian government gets away with denying the existence of slavery

The US Embassy in Mauritania took a lead role in coordinating the visit: they arranged meetings with Mauritanian government ministries and its anti-slavery agency, to allow them to highlight their actions to end slavery.

Indeed, the Mauritanian government has put in place an array of anti-slavery legislative, policy and programmatic measures over the years. The problem is that is has repeatedly shown inaction and an absence of will to implement these measures. Given that the governing elites have strong slave-owning connections and interests in maintaining the status quo, ensuring that laws and programmes against slavery are actually enforced is a major challenge.

On the day the US activists were due to arrive in Mauritania, I was at home in London – six months’ pregnant, I’d been unable to travel out with them. I imagined them arriving over the desert landscapes to be welcomed by our Mauritanian partners in their turbans and robes. Would the Mauritanian government attempt to gloss over the extent of the problem, as it had with so many others exploring the issue? Would they be invited to the homes of government representatives to enjoy the renowned Mauritanian hospitality, while receiving assurances that only the ‘legacy’ of slavery remains today?

Instead, to my astonishment, I received early morning calls explaining that the delegation was being refused entry to the country. Despite intense negotiations between the US Embassy and the Mauritanian government, the government would not budge. Anti-slavery leaders trying to reach them at the airport were blocked from even nearing the airport site. In over 50 years of the Jackson family travelling internationally to promote human rights, no member of the family had ever been denied entry to any country; this level of hostility was a first.

The official reason given for the denial of the group’s entry to Mauritania was that the Mauritanian government had not been given advance notification of the visit. However, given that the US Embassy arranged the visits through its official channels and organised meetings with several government ministries, it simply suggests the government is attempting to escape scrutiny on its slavery record.

The delegation decided that they had come too far in their efforts to simply return to the US. From Paris, they travelled to Senegal, which borders Mauritania, and met several Mauritanian activists, who travelled to meet them there, bringing slavery survivors too.

Despite the Mauritanian government’s efforts to hide slavery from the international public, Anti-Slavery International and other activists will not be deterred from speaking out about it until this abhorrent practice is ended. 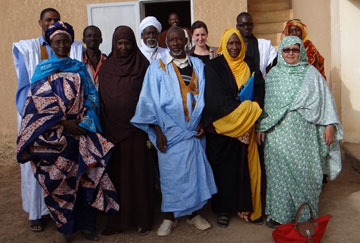 Mauritania slavery: What we do

Read about our projects and successes against slavery in Mauritania

Check out our work