Vicky Brotherton, Co-ordinator of the Anti-Trafficking Monitoring Group (ATMG), summarises the findings of the ATMG’s ‘Class Acts?’ report and what this means going forward. 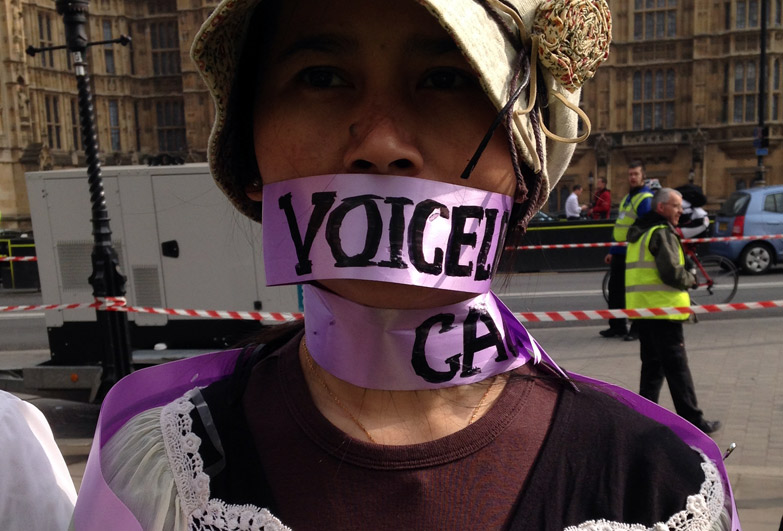 ‘Britain cannot claim to be a world anti-slavery leader until a victim-centred approach is uniformly applied’.

Aba (not her real name) was 14 when she was trafficked into the UK and exploited as a domestic worker for two years, before escaping.

She was formally identified by the authorities as a victim of trafficking and, at 16, placed in semi-independent local authority accommodation with little support. There she was befriended and groomed by an older man who turned violent and controlling.

She became pregnant, whilst still a child herself. As a result of the violence and the pregnancy, she came into contact with the police, and her unborn child was placed on the child protection register.

When eventually referred to a specialist anti-trafficking charity, she reported that no one had been on her side, and instead she felt blamed for endangering the life of her child.

All too often the Anti-Trafficking Monitoring Group (ATMG, a coalition of anti-slavery organisations founded to monitor implementation of anti-slavery policies in Britain) has come across cases like Aba’s, where victims of human trafficking have been let down. There has either been a failure to identify them as trafficked or a failure to provide support and protection to allow them to escape their traffickers and fully rebuild their lives.

At the same time, as British Independent Anti-Slavery Commissioner Kevin Hyland pointed at a recent conference, only around 1 percent of victims have the chance to see their traffickers being brought to justice.

So, the announcement by then Home Secretary Theresa May in 2013 of the introduction of a Modern Slavery Act was warmly welcomed, as too were similar announcements in Northern Ireland and Scotland.

The ATMG had high hopes for the Modern Slavery Act. We have long-called for the introduction of comprehensive legislation, which would include offences to prosecute perpetrators, as well as victim support measures.

Fast-forward to 2015. After a huge amount of scrutiny and effort to make the laws better, three new anti-slavery laws were passed across the UK.

However, our hopes for a victim-centred Modern Slavery Act were soon dashed and it became clear the Act was focused on prosecuting traffickers, not on helping victims.

Our latest ‘Class Acts?’ report, examining all three pieces of legislation, shows that it falls short compared to the new legislation in Scotland and Northern Ireland, particularly when it comes to the victim protection measures.

Crucially, Scotland and Northern Ireland have both included the minimum international standards of support and assistance for victims in their law, and have explicitly stated that authorities have a duty to provide support to victims.

The Modern Slavery Act also offers little protection to Overseas Domestic Workers (ODW), who must apply for a special visa before they can come with their employer and work in the UK. The Government still refuses to grant them a realistic chance to change their employers, widely recognised as one of the most basic protection measures for domestic workers.

We continue to be greatly concerned about the protection of child victims. None of the child guardianship schemes are yet up and running. In fact, the full implementation of the scheme in England and Wales is scheduled for as late as mid-2019. Given how many child victims are currently going missing, this delay is unnecessary and unacceptable.

Although all three laws provide protection for victims against unjust prosecution for crimes they were forced to commit by their traffickers, only Scotland provides exemplary practice, requiring that all relevant cases should be referred to the National Lead Prosecutor for Human Trafficking and Exploitation.

With these key differences there is a risk that victims across the UK being provided different types and levels of support. However, it is early stages in the implementation of the legislation and there are still opportunities to ensure that victim protection does not become a post-code lottery.

The statutory guidance setting out victims support entitlements in England and Wales is in the process of being drafted – it must match those in the Scotland and Northern Ireland Acts. The National Referral Mechanism (NRM, the UK-wide victim identification and protection system) is also currently under review, providing an opportunity to ensure consistency and high standards of protection across all UK jurisdictions.

The Independent Anti-Slavery Commissioner could play a big role in monitoring the measures taken to tackle modern slavery and protect victims across the UK, to make sure that the anti-slavery fight is taken forward at the same rate across the whole country.

As long as stories like Aba’s routinely continue to occur, the government cannot claim it is a world anti-slavery leader. But there is still time to make it happen, so that all victims receive appropriate protection and support regardless of which part of the UK they happen to be exploited in.

This article was first published on Thomson Reuters, here.