Unsolved crime – the Anti-Trafficking Monitoring Group Coordinator Anna Sereni writes on what we learned from monitoring the UK’s anti-slavery efforts for the last decade. 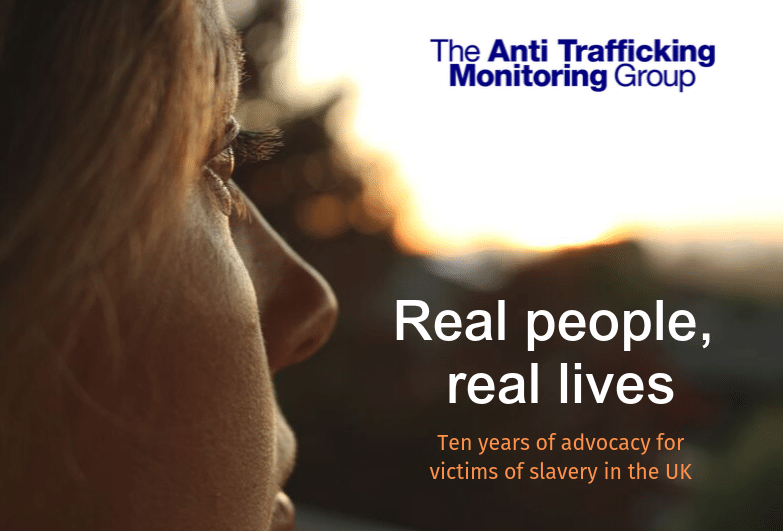 Ten years ago, the UK modern-slavery landscape looked different. Throughout the 90’s and early 00’s, the awareness of trafficking and modern slavery across the UK was very limited, and the response to it was in its infancy. Then, in 2008, the UK ratified the Council of Europe Convention on Action against Trafficking in Human Beings, which provided the building block for UK’s anti-slavery policies.

Although the Convention coming into force in 2009 was positive, leading non-governmental organisations (NGOs) working on trafficking in the UK were concerned about the lack of strategy for how the convention would be implemented. In response, they formed a coalition, the Anti-Trafficking Monitoring Group (ATMG) to monitor the implementation and the UK’s compliance with the Convention. Member organisations included those who directly support vulnerable people affected by specific forms of exploitation such as forced labour, sexual exploitation or domestic slavery.

This year the Group celebrates the 10th anniversary of holding the Government to account and advocating for the rights of victims. Today, the ATMG published a report, entitled Real people, real lives, looking back at clear successes of that decade and taking stock of key challenges lying ahead.

Over the last 10 years the ATMG has registered some significant wins in influencing the Government’s response to modern slavery. These wins are not just reflected in policy, but in the services and provisions afforded to some of the most vulnerable people in the UK.

The ratification of the Convention spearheaded the initiation of the National Referral Mechanism (NRM) – the UK’s primary support system for identified victims of slavery. Although in itself positive, the NRM is far from ideal and the ATMG was key in identifying the human rights violations and failures in the identification of victims, associated with treating victims as immigration problems first and victims second. Since then the coalition has successfully informed the improvement of parts of the mechanism to be more victim-centred.

The ATMG was instrumental in the shaping of the Modern Slavery Act (2015), including introduction of Independent Child Trafficking Guardians (ICTG), measures to protect victims from being prosecuted and the introduction of an Independent Anti-Slavery Commissioner.

Recently, the ATMG members have been successfully using strategic litigation to protect the rights of the victims and encourage the government to take a more victim-centred approach. A recent major win was the reversal of the Home Office decision to cut the rate of subsistence support provided to over 1,000 victims of trafficking, making them more vulnerable to re-trafficking. The ATMG also helped to force the government to drop the 45 days limit for providing support for survivors and obliged it to design a system providing long term support tailored to their individual needs.

However, despite measurable successes, the there are some big challenges still to be faced.

In the several years since the introduction of new anti-trafficking laws across the UK, their implementation is inconsistent and there is no mechanism to monitor the impact of the UK’s legislation. But the most important challenges lie in wider policies that affect the specific anti-slavery ones: on immigration and austerity.

The hostile environment means that people trafficked from abroad are treated as immigrants first, and victims only second. It means that often even the identified survivors are more likely to be sent to detention, deported, or stuck in asylum system than to be properly supported. Many are unable to work, instead, they are pushed into poverty and put at risk of being exploited again in their desperation to live decent lives.

The austerity policies that decimated public services in the last decade have had detrimental effect on support services for the victims of slavery. Despite best efforts of organisations directly supporting the victims, they are often of poor quality, with many frontline professionals lacking in training and capacity. The depletion of legal aid has excluded survivors of slavery out of publicly funded legal assistance. Mental health services have seen real-term cuts too, which only adds to the fragmentation of support available to survivors. Cuts to social services and education hamper efforts to prevent British children getting trapped in county lines drug gangs, while ten years of cuts to the police and judiciary have lessened their capacity to investigate trafficking cases.

Much remains to be done to heal these wounds. The many and varied challenges faced by vulnerable victims remain at the heart of the ATMG’s work. Our experience has shown that slavery never simply ends with the ratification of a law or convention, but that considered implementation of these laws and change in practices are crucial for real people affected by these crimes.

As ‘critical friends’, we give credit where it is due. While the UK’s government’s progress against slavery in the last decade should not be sneered at, it must continue to be held to account. To be truly world-leading, the government must look beyond its hostile, austerity stricken policies, in order to truly create a safe environment for victims to recover in. Looking ahead, the ATMG will support them to have their voices heard much louder to influence the UK’s efforts to implement a truly effective response to modern slavery.

Download in PDF format: Real people, real lives: Ten years of advocacy for victims of slavery in the UK.

Key successes of the Anti-Trafficking Monitoring Group include: