As IIED launches new research demonstrating that climate change not only increases vulnerability but is leading to modern slavery, our CEO Jasmine O’Connor, reflects on the evidence so far and what needs to happen now.

Anti-Slavery International’s long history of campaigning to realise freedom from slavery has shown us that slavery thrives where a weak rule of law meets discrimination and poverty.

We know that over 40 million people are currently in modern slavery and that in 2021, the World Bank estimated that more than 200 million people might be forced to migrate due to climate change by 2050.

Climate change and modern slavery are inextricably linked. As climate change threatens the very foundations of our society, we are beginning to see that the heightened vulnerabilities that people experience as they are faced with losing their livelihoods and contemplating migration are making them even more at risk of exploitation.

Since 2021, we have been working with partners and allies to gather evidence of the nexus between modern slavery and climate change. And the evidence is staggering.

Everywhere we have looked – from Peru to Ghana, to Bangladesh, and most recently, India – climate change is forcing migration and leaving those involved highly vulnerable to exploitation.

As the world takes on the challenge of mitigating the risks of our destructive actions, those with intersectional vulnerabilities that are exacerbated by climate change must be considered – and preventing modern slavery must be included in climate action plans at the national, international and institutional levels.

What we know so far

Climate change and environmental degradation exacerbate the drivers of modern slavery. When individuals are forced to migrate or are displaced due to extreme climate disasters, they become particularly vulnerable to modern slavery.

Our second report, and the first of our partnership with IIED, showed that:

IIED’s latest report, which examines evidence from Jharkhand and Odisha in India – areas which are experiencing climate change in very different ways – found:

This growing body of evidence comes to one conclusion: climate change is causing modern slavery.

What we must do

We know we are much stronger together. We need a movement, led by those who live in the affected regions, that can amplify the voices of those who have experienced the links between modern slavery and climate change. And together, we must continue to call for this nexus to be recognised and acted upon.

We want governments to include modern slavery in their national adaptation plans, to reduce the risk of thousands, if not millions, of people finding themselves in modern slavery due to climate change.

Together, as experts in our fields, we will continue to present the facts and add our voices to the discussion on the impact of climate change on human exploitation. We will continue to campaign on this important issue, contributing research and elevating the voices of those affected by this issue to prevent these injustices.

As Anti-Slavery International has done for nearly 200 years, we will continue to shine a light on the root causes of slavery and work to realise freedom from slavery for everyone, everywhere. 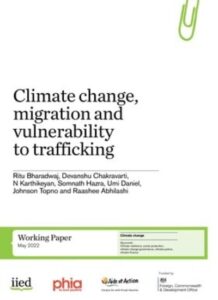 This blog was first published by The International Institute for Environment and Development, 8 June 2022.