With child labour on the rise for the first time in two decades, Anti-Slavery International’s international advocacy manager Kate Elsayed-Ali explains how our new strategy to tackle child slavery will help us to address one of the most appalling injustices facing millions of people worldwide.

Now, new Global Estimates on Child Labour released by the ILO and UNICEF today show that child labour has increased for the first time in two decades. At the beginning of 2020, 160 million children – 63 million girls and 97 million boys – were in child labour globally, accounting for almost 1 in 10 of all children worldwide. This is an increase of 8.4 million children in the last four years, with a significant rise in the number of children aged 5 to 11 years affected. The number of children in hazardous work – defined as work likely to harm their health, safety or morals – has risen by 6.5 million to 79 million since 2016.

This data is alarming: Global progress against child labour has stalled for the first time in twenty years, and the Covid-19 pandemic is likely to drive millions more children into child labour. The new estimates warn that nine million additional children globally are at risk of being pushed into child labour by the end of 2022 as a result of the economic and social shocks of the pandemic and school closures. This number could rise to 46 million more children in child labour if access to critical social protection coverage is not secured.

Our work with slavery affected communities around the world has shown that just as child labour numbers are now rising, so too are the drivers and prevalence of all forms of child slavery.

In addition to the shocks of the Covid-19 pandemic, the impact of climate change and environmental degradation on labour and migration will intensify over the coming years, leading to conditions where children are more vulnerable to slavery. We are addressing this through our work on slavery and climate change, as identified in our landmark report, From a Vicious to a Virtuous Cycle, on the vicious circle that links two of humanity’s greatest challenges.

Children, especially girls, are highly vulnerable to slavery because of their dependency and lack of agency, and norms about children belonging to adults. Children in slavery experience psychosocial trauma at a critical stage of their development. This, alongside a lack of their rights to education, health and care, affects opportunities throughout their lives, often trapping them in slavery as adults.

The International Year for the Elimination for Child Labour

The UN declared 2021 to be the International Year for the Elimination of Child Labour. It’s a global call to ‘Act, Inspire and Scale up’ efforts to achieve the Sustainable Development Goal (SDG) Target 8.7 to end child labour in all its forms by 2025. People and organisations worldwide are called on to commit to a 2021 Action Pledge: an action in 2021 that contributes towards this 2025 target.

The newly released Global Estimates on Child Labour show that we are losing ground in the fight against child labour. If the world is serious about ending child labour by 2025, we need to pursue a ‘leave no one behind’ approach: Governments and the international community must prioritise action to reach the most marginalised and excluded – including children in slavery. That’s why we’re clear that efforts to end child labour by 2025 must include a clear focus on ending slavery for children.

In 2021, Anti-Slavery International pledges to launch a new five-year strategy to end child slavery – one of four priority themes to achieve our vision of freedom from slavery for everyone, everywhere, always. We will focus on child slavery, one of the worst forms of child labour, to make sure that no child is left behind: so that children in or at risk of slavery – who are among the most marginalised and excluded – are prioritised, reached and included.

By launching our new strategy, we will contribute towards global efforts to end child labour by 2025.

We will strive to: 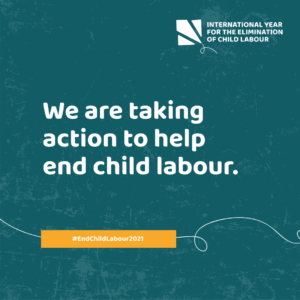 We will do this by:

That’s our work – but we’re not alone in understanding the need to address child labour. We’re also calling on other organisations to make child slavery a central concern. In particular, we’re calling for: