Recently we have been asking supporters across the UK to write to their MPs, encouraging them to Ditch Detention for survivors of modern slavery. More than a thousand people wrote to their MPs, and we were really pleased that the Government granted a debate on this issue, which is set to happen on 28 April. You can watch that debate on Parliament TV, or follow us on Twitter as we will keep a close eye on proceedings.

But this is not the end of our campaign to secure a crucial protections for survivors and victims of modern slavery — and you can still get involved. Just as we launched our Ditch Detention campaign, alongside allies pushing for an end to prison-like detention for survivors, the Government released its ‘New Plan for Immigration’. As I wrote in March, we are concerned that the plan could make things much worse for people who have experienced, or are experiencing, exploitation, by labelling people as worthy or unworthy of the UK’s support, limiting their access to protections and entitlements, and attacking their ability to seek legal redress.

The Government has also released an immigration consultation, which offers us — and you — an opportunity to explain why we need to see substantial changes to the Government’s proposals. We have explained our view on the consultation in a new briefing note, and I wanted to set out our position on a few key points below. I hope you’ll read this blog, and our note, before responding to the immigration consultation — every voice raised against the Government’s damaging plans, which stand to leave people at risk, could make a real difference.

Children set to be hurt by Home Office plans

Our friend Patricia Durr, of ECPAT UK, wrote in some detail recently about the plan’s likely impact on children and young people. There are lots of things to concern us in the ‘New Plan for Immigration’, but the plan’s impact on children feels especially unfair and badly thought through. As we explain in our briefing note, we strongly object to the Government’s plans to introduce dubious and invasive ‘age assessment’ methods that could lead to children being misidentified as adults. We’re also concerned the plan could see the UK fail to meet its international obligations to protect children’s welfare — already a serious problem, with only 28 child victims of modern slavery receiving leave to remain in the UK between 2016 and 2019.

Children who are victims of modern slavery already face terrible barriers when they seek support and justice; the New Plan for Immigration will make these barriers even harder to overcome. It is a charter for child misery — and it has to change. 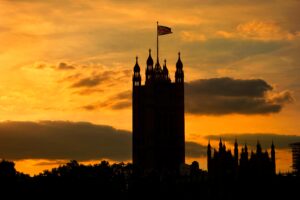 As if the plan’s potential harms to child welfare weren’t enough to concern us, we’re also worried that the ‘New Plan for Immigration’ will make it harder for the UK to develop effective anti-slavery policies. It’s especially disappointing to see reforms to the UK’s modern slavery systems set within a document on immigration policy; although we agree the Act needs reforms, setting these within immigration policy falsely suggests that modern slavery is only an immigration concern. And sadly, given the negative and ill-informed way immigration is spoken about in much of public and political discourse, together with the unevidenced assertions in the proposals around ‘abuse’ of the system, it could lead to some survivors and victims being branded as either worthy or unworthy of the UK’s support — a Victorian mindset that sounds out of place in a country that sees itself as a beacon for freedom from slavery.

Survivors’ voices need to be heard

We’ve always argued that the only truly effective way to tackle modern slavery is to attack its root causes. To do that, the Government needs to listen to survivors, and to people who work closely with them, throughout the policy-making process, in order to understand their experiences and to take account of their fears and hopes. The ‘New Plan for Immigration’ as published overlooks this insight — and although of course people with lived experience of slavery can and will respond to the immigration consultation, it is relatively inaccessible and very limited in scope and timeframe. Nor have people with lived experience of the systems been given any real assurance that they will be heard. 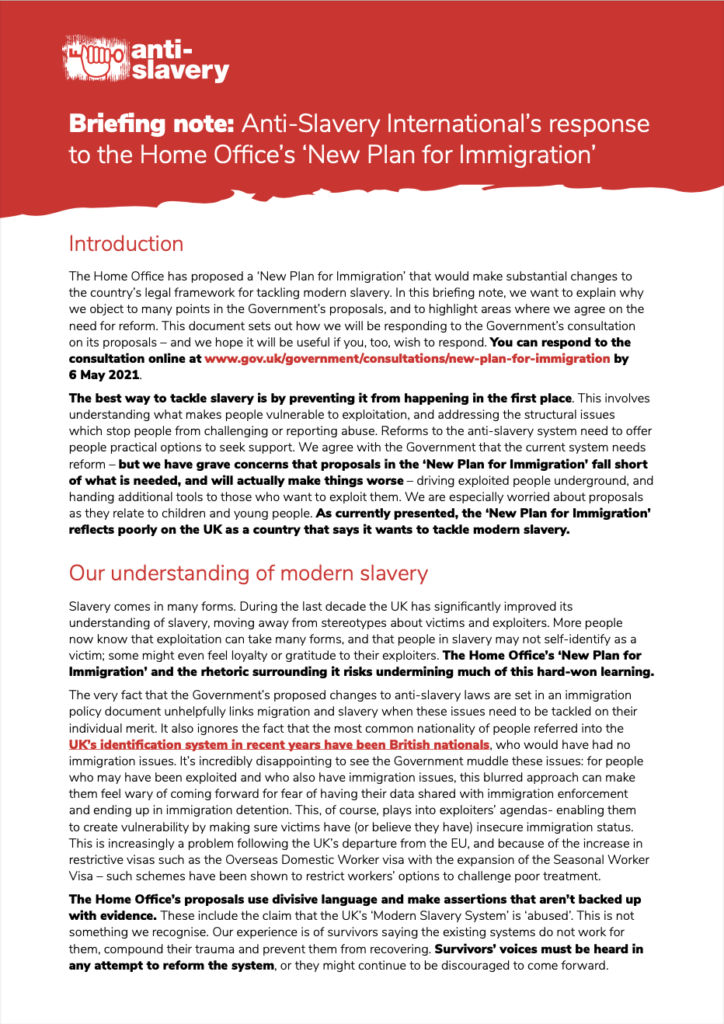 As our briefing note explains, we agree the UK’s modern slavery prevention, identification and support systems need reform. But overall, we think the proposals could cause serious harm to children and adults who have experienced or are experiencing exploitation, including modern slavery. Instead, the Government should focus on the real needs of people with lived experience, including enabling them to recover and rebuild their lives through access to work or education. We need as many people as possible to speak up on this, given the restrictive and short-term way in which the immigration consultation has been established. So, I need to ask if you can spare a few minutes today to join us in our campaign to better support survivors and victims of modern slavery, by responding to the immigration consultation.

The consultation is open until 6 May, and you can respond here — please do read our new briefing note before you respond.. Thank you for any time you are able to spend on this essential effort to make sure the Government hears our concerns.