Over 180 years ago anti-slavery campaigners finally achieved what they had fought for over 60 years – abolishing a system of slavery in the British Empire.

But the abolitionists, such as Thomas Clarkson knew the job of ending slavery was far from complete, which is why, a year after – in 1839 – they founded the British and Foreign Anti-Slavery Society, in the 1990s renamed as Anti-Slavery International, to continue disrupting slavery in all its forms. This year we mark its 180th anniversary.

We have achieved plenty throughout our history, from ending particular systems of slavery in Belgian Congo, Peru, and China, to playing a big part in passing all major anti-slavery conventions, to ending many forms of slavery in modern times, to outlawing the traditional form of sexual slavery in Niger only last month.

We have freed thousands of people from slavery along the years. The stories of freedom we get from the partners we work with on the ground are what drives us today.

People like from Tatinatt from Niger, who was born and grew up in slavery. But thanks to our support, she and her children are no longer in slavery and are learning to read and write.

And yet, we are not celebrating.

We have 40 million reasons not to celebrate, as that is the number of people estimated to be trapped in slavery across the world today. People trapped and exploited in agriculture, manufacturing, construction, domestic work, the sex industry. Children, who instead of starting their lives with joy and freedom, get ruthlessly exploited by adults.

So instead of celebrating, we’re working harder than ever. Ending slavery won’t happen overnight. We don’t just need to free people now, we need to ensure they don’t get trapped in slavery again.

But every person freed from slavery, every law changed, every campaign won – is a step closer to a world without slavery.

Join us to provide freedom to all, children and adults, one at a time. This anniversary is a great opportunity to get involved, and there are many ways to do so.

What can you do? 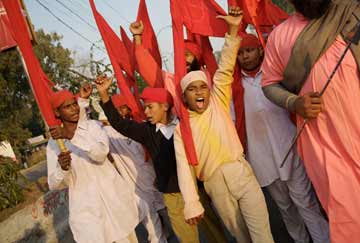