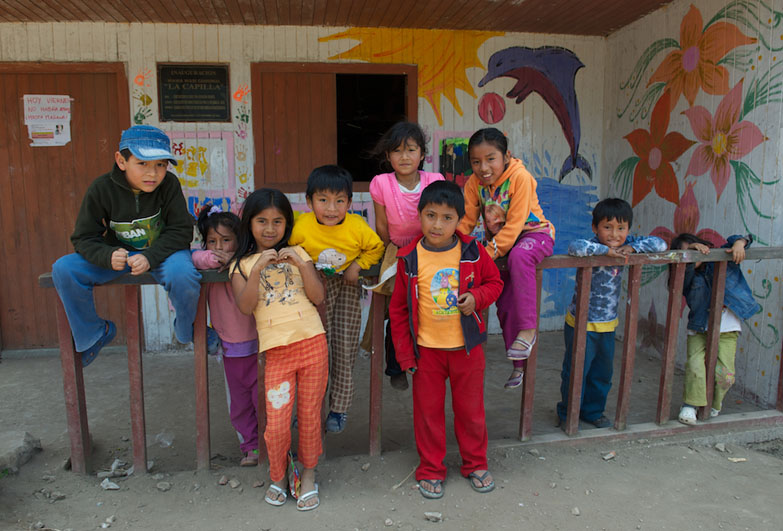 Shackled to the past: An exploration of the best prospects for combatting forced child begging in Nigeria

Nigeria has more children growing up without a formal education than any other country. Largely unregulated and poorly positioned to serve as a safety net for underfunded and overstretched public education services, the Almajiri system has, since the 1980s, moved away from its roots as a traditional form of structured religious guidance to one based on exploitation, in which students are expected to sustain the schools and their own subsistence through begging and child labour. Limited effort made to improve the conditions at Qur’anic schools  and this report outlines why previous interventions have failed, and what must happen to achieve progress in the future.

A joint submission by Anti-Slavery International, ANTD (Association Nigérienne pour le traitement de la délinquance et la prévention du crime), and Timidria, for the Universal Periodic Review of Niger, 38th session. It provides information and recommendations on descent-based slavery; the impact of Covid-19 on slavery; discrimination against people of slave descent; access to education for children of slave descent; the worst forms of child labour in Niger including forced child begging of talibés (children who study at residential Quranic schools), children in descent-based slavery, and of child domestic workers; and the wahaya (so-called 5th wife) practice.

Reaching out for justice: Overcoming barriers for child survivors of sexual exploitation and trafficking accessing justice in Nepal

Suffering under silence: investigation into the forced begging of Talibé children in Niger

Joint submission by Anti-Slavery International and La Rencontre Africaine pour la Défense des Droits de l’Homme (RADDHO) to the 127th session of the Human Rights Committee  14 October – 8 November 2019. This submission contributed to the 5th periodical review of Senegal. The submission urges the Government of Senegal to demonstrate sustained and consistent political will to end forced begging of talibés and take additional measures to enforce laws, prosecute perpetrators, protect children forced to beg, and accelerate the implementation of daara modernisation to eradicate mistreatment and exploitation of over 100,000 Talibe.

This briefing assesses Senegal’s compliance with ILO Convention No. 182 on the Worst Forms of Child Labour (ratified in 2000), with regard to the issue of forced child begging of talibés.

Precarious Journeys: Mapping vulnerabilities of victims of trafficking from Vietnam to Europe

April 2019. ECPAT, Anti-Slavery International, Pacific Links Foundation.
This research was conducted by Every Child Protected Against Trafficking (ECPAT UK), Anti-Slavery International (Anti-Slavery) and Pacific Links Foundation (Pacific Links). Over one and a half years the research investigated the issue of human trafficking from Vietnam to the UK, and through Europe; specifically Poland, the Czech Republic, France and the Netherlands to the UK. This report summarises the main findings of the research. It highlights that whilst there are many vulnerabilities which result in a person leaving Vietnam, vulnerabilities are not inherent in all Vietnamese migrants. Situational and contextual factors can increase vulnerability and risk of trafficking across all aspects of a migrant’s journey from Vietnam to Europe.

Anti-Slavery International briefing on child begging in Senegal. Submission to the 125th session of the UN Human Rights Committee, 4 to 29 March 2019.

Behind Closed Doors: child and early marriage as slavery

This paper argues that the levels of abuse, exploitation and control experienced by children as a result of child and early marriage can often meet international legal definitions of slavery and slavery-like practices, such as forced labour and trafficking. The paper calls for international institutions to explicitly recognise key incidences of child and early marriage as constituting slavery and slavery-like practices and take appropriate action to combat them as slavery abuses.

Listen to Us! Participation of child domestic workers in advocacy

Out of the Shadows: Child marriage and slavery

Based on interviews with around 3,000 children the report is a study into the psychosocial wellbeing of child domestic workers across six countries in three continents (Peru, Costa Rica, Togo, Tanzania, India and Philippines). This report makes an important contribution to our understanding of child domestic work and provides important indicators for the circumstances that affect these child workers as well as the aspects of their lives that contribute to their wellbeing in a positive way.

Time for Change: A call for urgent action to end the forced child begging of talibés in Senegal

2011. Anti-Slavery International.
Available in both English and French, this short report examines the practice in daaras (Koranic schools) of sending boys as young as five years old out to beg for several hours a day. Often living far from home and in squalid conditions, talibés are frequently subjected to abuse if they fail to meet their begging quotas. The report updates the information used in Begging for Change (Anti-Slavery International, 2009) and recommends action to bring an end to this situation in Senegal.

2010. Anti-Slavery International, Paul Robson.
This report finds that trafficking of children to cocoa farms in Côte d’Ivoire still occurs. The research found significant numbers of young people in Mali and Burkina Faso who had worked as children in cocoa farms in Côte d’Ivoire in the last five years. The practices occur in the context of large-scale movements of people within the region including the trafficking of children to other  agricultural activities and to other sectors.

Begging For Change: Research findings and recommendations on forced child begging in Albania/Greece, India and Senegal

2009. Anti-Slavery International, Emily Delap.
This report is based on research conducted in Albania and Greece, India and Senegal, and looks at the phenomenon of forced child begging both in its local specifics and global commonalities. Forced child begging involves forcing boys and girls to beg through physical or psychological coercion. ISBN 978-0-900918-73-5

Begging For Change: Forced Child Begging: A toolkit for researchers

2009. Anti-Slavery International, Emily Delap.
A toolkit outlining qualitative methods for researchers interested in exploring the more exploitative and damaging forms of child begging, where children have been physically forced or coerced into their work. However, manyof the tools and methods can be adapted to find out about the lives of other girls and boys living or working on the streets, and about other hard-to-reach and exploited groups of children. ISBN 978-0-900918-72-8

2009. Anti-Slavery International, Emily Delap.
Tools developed for training research teams who took part in a pilot research project on forced child begging. Aims to provide the reader with the basic skills needed to carry out qualitative research, with a particular emphasis on research with children. ISBN 978-0-900918-74-2

‘They Respect Their Animals More’: Voices of child domestic workers

2008. Anti-Slavery International, Jonathan Blagbrough.
This report is the product of group discussions and individual interviews with more than 400 current and former child domestic workers from urban and rural areas in Benin, Costa Rica, India, Nepal, Peru, Philippines, Tanzania and Togo, to inform about the situation and needs of child domestic workers in order to better target programmes and policies on the issue. It also aims to encourage thinking about child domestic workers not simply as subjects of concern, but as social actors able to articulate their needs and capable of transforming their own lives, and the lives of others.ISBN:978 0 900918 65 9
(also available in French and Spanish)

Missing Out: A Study of Child Trafficking in the North-West, North-East and West Midlands

2007. Christine Beddoe, ECPAT UK
The report highlights the cases of 80 children known or suspected of being trafficked into the UK for sexual exploitation, labour exploitation and forced marriage. More shocking is that 48 of these children have gone missing from social services care and have never been found.

2005. Maggie Black, Anti-Slavery International.
A practical guide to what works and why when it comes to practical assistance for child domestic workers. Contains experiences of local practitioners from Africa, Asia, Latin America and the Caribbean; international organisations and networks working on this issue. And the views of almost 500 current and former child domestics consulted in nine countries. A companion publication detailing the results of these consultations will follow in early 2006. Particularly useful for small and medium-sized NGOs seeking ways to improve their existing programmes or planning to add assisting child domestic workers to their activities. ISBN 0 900918 59 4
(also available in French and Spanish, see Translations page)

2004. Anti-Slavery International.
A collaboration between governments, bilateral institutions, international and non-governmental organisations has resulted in the development of this code of conduct, which aims to encourage improved working conditions and treatment of child domestic workers and child victims of trafficking.

The Cocoa Industry in West Africa: A history of exploitation

2004. Anti-Slavery International.
This report provides an in-depth analysis of how cocoa is produced and how child and slave labour enter its chain of production. It relates the history of cocoa production and explores how this commodity fits within a global market. Drawing on a wide range of sources, it concludes with recommendations for consumers, the chocolate industry and governments on actions needed to address this serious problem.

2002. Anti-Slavery International.
Produced by Anti-Slavery International for organisations wanting to persuade governments to take action against child labour. It explains clearly how and why to use international monitoring and complaints procedures to encourage governments to respect their obligations regarding child rights. Twenty-eight pages including cover, with illustrations and case studies.
(also available in French and Spanish, see Translations page)

2002. NGO Group for the Convention on the Rights of the Child Sub-Group on Child Labour.
Why do children work? Most children work because their families are poor and their labour is necessary for their survival. Discrimination on grounds including gender, race or religion may also play a large part in why some children work. This six-page report investigates how discrimination works as a cause and a consequence of child labour.

Child Domestic Workers: Finding a voice, a handbook on advocacy

2002. Maggie Black, Anti-Slavery International.
This book draws on the experience of activists from 17 countries and representatives of internaitonal and regional agencies who attended a workshop that Anti-Slavery International convened in April 2001. A practical “how to” guide which will help local level NGOs and activists plan, design, implement and evaluate the impact of an advocacy strategy on child domestic workers. ISBN 0 900918 51 9 (also available in French and Spanish, see Translations page)

2001. NGO Group for the Convention on the Rights of the Child the Sub-Group on Child Labour.
Do You Know About the ILO Worst Forms of Child Labour Convention? A 24-page brochure on how this convention creates new opportunities for civil society organisations. The brochure focuses on involvement in ratification and implementation of the Convention in an easy to read and lively format.
For a hardcopy (only available in Arabic or Spanish) please email your details, including name, organisation, and address to info@antislavery.org

1997. Anti-Slavery International.
This practical “how to” guide draws on the experiences and views of non-governmental organisations and others working with child domestics in Asia, Africa and Latin America, offering useful insights for anyone who wants to help the children concerned. ISBN 0 9009 18 41 1